It began in early 1993 when two high school friends, James Bennett and John Leth-Nissen, who enjoyed creating their own pen and paper games were introduced to a new medium, Internet Relay Chat (IRC).  Both had spent time dialing in Bulletin Board Systems (BBS) using 14.4K modems (eventually 28.8K and beyond!) and played Multi-User-Dungeons (MUDs).  But these systems were typically regional, required accounts to play, and limited the number of people who could connect simultaneously.  They also had a tendency to disappear and would be crossed off a printed list of phone numbers.

IRC was different.  Thousands of people connect connect at once.  Channels were formed where like minds would gather and chat (or argue!) with people from all around the world in real time.  There was lag and disconnects but it was amazing!  There were already games on IRC using automated programs written in script called "bots".  But these were limited to poker or word games.  We started talking about building a persistent world war game and "Conquest!" started to take shape.  Once we figured out how to generate random numbers, development began in earnest.

I lived in St. Augustine, Florida at the time and John in Daytona Beach.  Most Saturdays I would drive and meet up with John where the two of us would pour over Conquest! code for many hours.  The scripting language was very similar to UNIX scripting and learning the idiosyncrasies took time.  But after approximately 6 months, Conquest! 1.0 was released on #Conquest on efnet.  The reception was incredible.

Original Conquest! Logo
Players from all over the globe joined to compete against one another in the world we created.  There was just one class, one continent, and no cities.  There were bugs and "nerfs".  But the action and gameplay drew players in.  Shortly after the launch we immediately started working on enhancements.  The game started as one bot but before long the player base outgrew it.  The code was split into server and client processes; eventually, there were 4 clients to keep up with the load!

The IRC bots were inherently flaky and I coded an elaborate system to attempt to keep them all in sync.  There was quite a bit of drama when the server went to save data; if the process crashed or lost connectivity hours worth of battles could be lost.  There was drama in the game as well, as alliances were formed (and frequently broken!).  The politics in the game would rival anything in the "real" world. 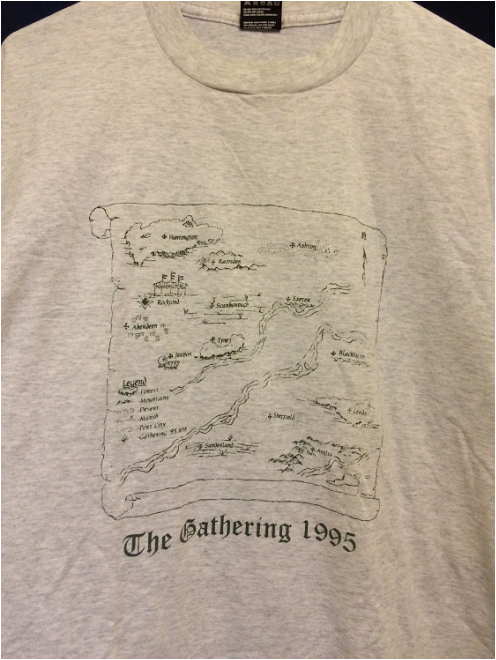 Gathering T-shirt from 1995
In 1995, the first Conquest! "Gathering" was held in Orlando, Florida.  Approximately 15 players met face-to-face to share our war stories, triumphs, and defeats.  It was thrilling to finally meet these great people in person.  Three more Gatherings were held, in Chicago, Dallas, and Las Vegas.  I met some amazing people and am still in touch with some of them today.

In 1998, the game had finally outgrown the IRC script and I began converting it to C.  This was quite an undertaking (it took approximately 6 months) but dramatically improved performance, scalability, and reliability.  The architecture remained a client/server model and over the years I experimented with different clients, such as Web, and Instant Messenger (before AOL changed the protocol!).  I could never get a good graphical client written, however, and that was the direction I had always wanted to take Conquest!.

In 2005 or so, I left the game to pursue other interests.  I released the binaries and the game continued to run in one form or another for several years.  I never forgot about it and early in 2015 a former player approached me about taking Conquest! mobile.  This re-ignited my passion for the game.  I opened up the server and corrected many wrongs (how was this stuff ever working?!?).  I created a new web page and built a reference client using Windows Forms.  And I partnered with a graphic artist, and Steffon, another former player, to design and build a Unity based client.  Finally, Conquest! was getting the medium it deserved.

​The next chapter of Conquest! is being written.